Start of the Year and TNNA

So I'm blazing past the new year. I thought about doing a reflection post, but after the first I didn't really want to reflect on last year. It wasn't a great year for my family with the exception of o being born. And that didn't even go too smoothly! On to 2011, 01/11/11 to be exact!

Knitted Wit started the year off with a bang! Chrissy's pattern for Ladies That Lunch is fabulous, very fitting for us ladies to the town in. I've been stalking the Ravelry group to see some finished socks. I need to wind up my yarn and cast on!

Next for the start of the year was TNNA. What an amazing weekend. I got back late last night with o and promptly went to bed. o had different ideas, but we eventually got some sleep. We flew down with Debby and Stevanie and settled in Thursday. It was nice waking up there since we had so much to do Friday. Friday we set up the booth, sold knots at Sample It

and then attended the fashion show. Just before the fashion show Joel, from Lantern Moon asked if o would be okay with being in the fashion show. As long as he's fed that kid will go along with just about anything! So we got o all dressed up (and fed) and ready to make his entrance on the cat walk. o was the hit of the show!

(that's michele getting a better picture than me!) A major photo op! I only wished I would have put a sign on his butt to tell everyone where he would be and that I dyed yarn. Already o was getting some major love from everybody but after the fashion show people would holler his name across the hotel lobby! He was such a trooper and did great with all the attention.

Saturday the show opened and we were off and running. I can't believe all the people I met and saw walking the show, just amazing. Everybody was so friendly (I'm sure it had nothing to do with the cute baby attached to me!). I can't remember what night it was but we went to Lantern Moon's house (they stayed in house instead of a hotel, it was lovely!) for dinner. It was lovely to be with people that are like family to me in a relaxed setting. Sunday and Monday were more of the same, show all day long with a huge baby in a pack. o lasted the whole show with no melt downs, did a great job taking naps in his nest and was friendly to just about everybody. 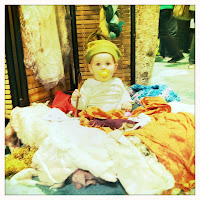 We know o was charming enough on his own, but then Sarah went and made an amazing hat that worked perfectly with the booth! Many thanks to her beautiful work!

As far as business goes, you'll now find Knitted Wit in a few new shops in California! So excited to add a state to the roster. A sales rep will also be showing my line. Very excited about this! While I love showing what I do and talking about why I name colors the way I do, I can't get everywhere I want. I also connected with a few designers that will be using my yarn, very excited about this! I love collaborating with people. Creativity does not exist in a vacuum.

I'm also working on an idea for cross stitch project. If you know of anybody who designs sassy cross stitch pattern put them in touch with me.

I'm sure I've missed something from the trip, but that's what I can remember for now! I'll share more as it becomes public. I want to thank Debby and Stevanie for an amazing weekend and for helping with o. I wouldn't have been able to last the weekend with out them!

If you are posting a picture of o from TNNA, please let me know. I would love to give Sarah credit for the amazing hat and let people know what I do as well. Thank you.
Posted by Lorajean at 8:40 PM